Ian Wilcox, RAF Veteran, cycled  26 miles on Saturday, June 11 in the RAFA Ride Challenge. He is taking part in memory of his former 50-year-old RAF colleague who sadly passed away too early on 24th April this year.

Ian works at Fitzwilliam Hospital in Peterborough as an Operating Department Practitioner. He is a vital part of the multidisciplinary operating theatre team. In this role, he assesses patients prior to surgery and provides individualised care and he prepares a wide range of specialist equipment and drugs. He has other responsibilities including audits, risk assessments, resus training (BLS), anaesthetics, and recovery.

“I retired from the RAF in May 2020 after spending 35 and a half years in service and thought this would be the ideal opportunity to honour our lost friend whilst raising funds to support others in the RAF community,” Ian said.

The RAFA Ride Cycle is an annual fundraising event in the heart of the Leicestershire countryside. It connects teams across the world and RAF personnel on station who virtually join the event.

“This is my first ride so as a novice I am starting at  26 miles which will challenge me this time. I will progress to greater distances in the future. I have done some training but not as much as I would have liked,” Ian continued. 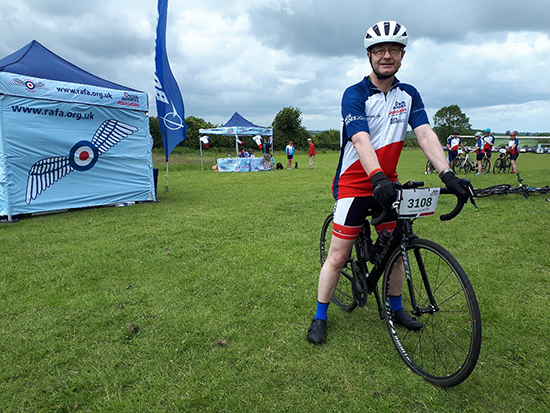